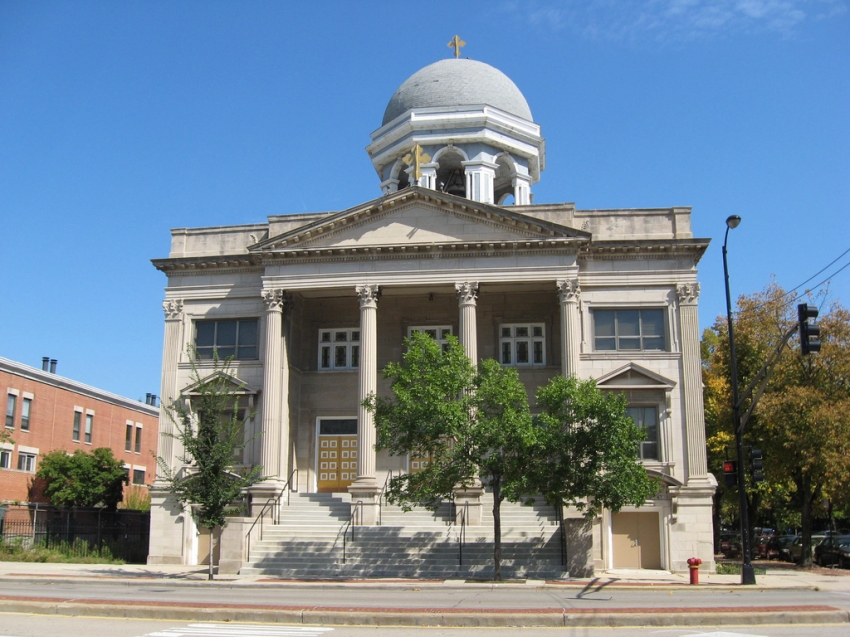 St. Basil Greek Orthodox Church was built in 1910 as Anshe Sholom Synagogue.  Designed by architect Alexander Levy, the Greek Revival-style temple contained pews upstairs where women were required to sit during services.  By the 1920s, many Jewish families had moved to the Lawndale neighborhood, where Anshe Sholom built a new temple.

In 1927, the building was transformed into a Greek Orthodox Church.  In its April 9, 1927, account of the dedication, the Greek newspaper Saloniki noted that, “Over two thousand Greeks participated” and that more than 600 people had to stand in the aisles.  The church was designated the first Greek Orthodox Cathedral of Chicago by Bishop Philaretos, who was the first Bishop in Chicago.  The Orthodox Youth Organization of Chicago was initiated at St. Basil in 1946.

Parishoners began to leave the area in 1947, with the construction of the Eisenhower Expressway. In the late 1960s and early 1970s, Greektown was decimated as homes and businesses from Halsted to Racine and from Harrison to Taylor were torn down to make way for the University of Illinois. Urban renewal projects and the creation of the Illinois Medical District caused further displacement west from Racine to Ogden. Though membership declined during these years, a core of faithful members attended worship services and supported the church.

A fire in 1977 did enormous damage to the struggling church. Through the ensuing years, a community of members dedicated themselves to rebuilding St. Basil. In 1988, Father Chris Kerhulas was named full-time pastor of the church. Soon afterward, the church took on a complete renovation of the sanctuary, including the installation of new icons created by the renowned iconographer Athanasios (Tom) Clark of Athens. Upon Father Kerhulas’s retirement, parish leadership passed to Father Panteleimon Dalianis in 2010.

Yet another fire ravished the church in March 2013, and again St. Basil rebounded. Liturgy and sacraments were celebrated in the Philoptochos Hall in the basement. The Ladies Philoptochos Society, Prison Ministry, and Sunday school likewise met downstairs. In the face of adversity, St. Basil grew closer as a faith community.

Now a strong capital campaign is allowing St. Basil to resume services in a completely renovated sanctuary. In the coming months we hope our newly plated dome will be a beacon welcoming back parishioners who have been awaiting the reopening and attracting new members from the now-thriving communities that surround the church—the Medical District, University Village, and the South and West Loop. Once inside, worshippers will look up the inside the dome to a new icon of Christ the Pantocrator.